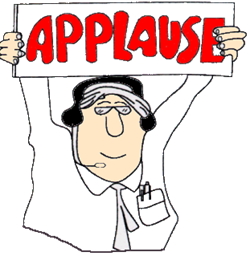 Eye-rolling is all I have left of my teaching career, so I was thrilled when I was invited to work with a high school class of seniors working on college essays.

While I looked forward to teaching a mini-lesson, I was more excited about being with teenagers again. The lesson was fine, my jokes were spot on, and I definitely had more fun than the students. I mean, who truly enjoys writing a college essay? However, they were very gracious and kind. In fact, they literally applauded for me when I was introduced by their teacher.

I politely thanked them for the applause, and as there were several of my former students in the room, I asked why they never applauded me when I was their real teacher. They politely laughed just as they had politely applauded.

Just so you know, there were a few times I received various types of applause as a teacher: when I postponed the date of a major grammar test (relief), when I told my ridiculous story of the gerund (appreciation for creativity), when I tripped and nearly fell (true entertainment), and when my principal and superintendent interrupted class to present me with an award (the big wigs were there and expected to hear applause).

Applause. It usually feels pretty good no matter the type or reason.

Although I never slapped my hands together for the students I worked with, my heart was giving them a standing ovation.

Here are a few of the students I remember:

These students and I exchanged applause in different ways.

On this Thanksgiving Holiday, let’s make sure we are not just giving polite applause to God, our family, and our friends. Let’s relish in our relationships and move beyond simple, rote, expected, polite applause and move into heartfelt standing ovations.