The Crime Before Christmas 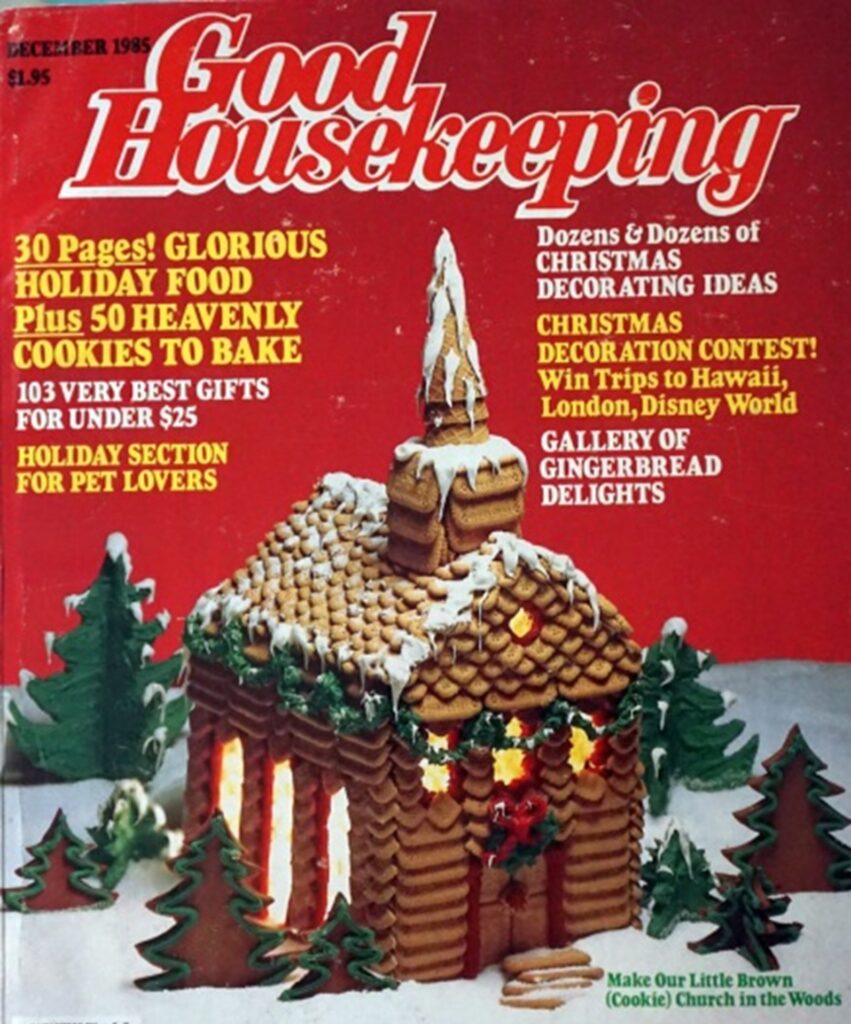 I am no Sherlock Holmes, but I was able to piece together the details of the crime. The perpetrators had even left the weapon behind.

The timing for such a destructive event was horrible: a few days before our annual Christmas Open House.

I had been so excited to show off my beautiful English tea biscuit Christmas church built by tediously following the directions from page 22 of Good Housekeeping magazine. Although I am not good with crafts, I was determined I would make my cookie church look exactly like the one on the magazine cover and display it on my piano for open house.

I had spent many long days of sticking the rectangular cookies on a cardboard frame with magical white icing. Somehow, that glossy concoction seemed to end up all over my kitchen every time I mixed up a batch, but it was miraculous! A biscuit broke? Just slap some icing over it and voilà! – a snow drift is born.

I have never been the crafty type (I am more the bake-y type), so this magnificent church with more than its share of snow drifts was quite an accomplishment for me. Once completed, I carefully placed it atop my 1923 Knabe baby grand piano in the living room. It sat at just the right angle to impress all who walked through the front door.

Colored cellophane created stained glass windows, and I was able to get a steeple properly situated after a mere 15 attempts. Inside was a light that glowed warmly through the windows, and one could almost hear the congregation singing Angels from the Realms of Glory! I hate to admit it, but I think I was too proud of my accomplishment.

My moment of horror had occurred after my last-minute grocery run a few days prior to the open house. My husband had stayed at home with the children, so I could shop without distraction. When I pulled into the garage, everyone came out and helped carry and put away the groceries. How nice! My family is in the Christmas spirit! – or so I thought.

Then they suddenly disappeared.

Dusk was beginning to elbow out the daylight, so I went into the living room to turn on the Christmas tree lights and the light inside my magnificent tea biscuit church. As I walked toward the piano, I noticed that the church was sitting at a very odd angle; my annoyance began welling deep inside. I plugged in the cord and then returned the church to its original angle which revealed the reason everyone had scattered so quickly.

The roof and most of the side of the church were smashed in! And there, underneath the piano. acting all innocent, was the perpetrator: a ball.

“I told you she’d notice,” a little voice said quietly from the other side of the room.

I looked up to see my husband and three small children peeking around the doorway, as if they were set to make their get-away. If I hadn’t been so upset, I probably would have smiled at how adorable they all were.

One child was very eager to recount who threw the ball and who missed the catch, but at that moment I didn’t really care.

I was angry that my family had not considered what a horrible idea throwing a ball in the house was with my church looking so magnificent on my piano. None of them had tediously worked to create the church that had now lost its beautiful perfection (at least in my mind it was perfect). My hours of work seemed to count for nothing now and I considered throwing the entire thing away.

My husband, the only family member brave enough to approach me, came over and suggested I mix up some more miracle icing and do some repair work. “No one will notice,” he said. Although he and I both knew that was not true nor was it the point, I decided to do as he had suggested.

Armed with my last partial box of English tea biscuits and another batch of wonderworking white gloss, I began mending the mess. It soon became obvious that my church was not going to be the masterpiece it was before the ball incident, no matter how many snow drifts I applied. However, it would be good enough to sit on my piano and remind me of the little country church where my parents took me when I was young, if that church had suffered tornadic activity.

Can you believe it? Christmas arrived that year despite my English biscuit church catastrophe, and it will arrive again this year. despite any adversity that creates a mountain between our hearts and the Christ child.

Many this year are dealing with more serious issues than a ball smashing a decoration: an empty place at the table, a diagnosis or health condition, conflict, uncertainty, financial struggles. But, Christmas does not depend on circumstances.

Christmas is found in the power of hope, salvation, love, and peace embodied in the Christ child born in a Bethlehem stable back then and residing in our hearts today.

For unto us a child is born,
to us a son is given,

A child whose birth

A child whose first cries

blanketed all of humanity in peace, hope, and love.

A child who remains God’s gift to us all, no matter the circumstance.