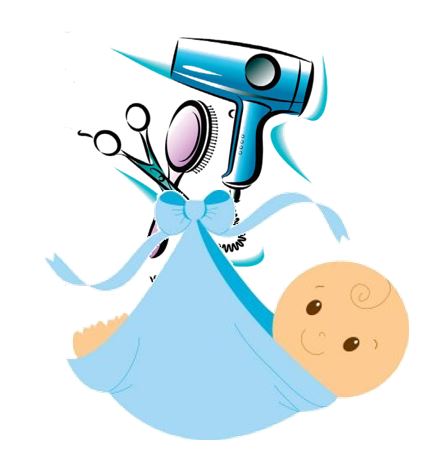 If you ask me, those terms are deceiving. My mom made regular trips to the beauty shop, which was fine because she was beautiful. However, I am leery of calling Kim, the lady who cuts and colors my hair, a beautician because that is laying an insurmountable task on her shoulders. She can do her best, but she is not going to make me beautiful; the best she can do is make my hair look good. I want to respond to her question, “What are we doing today?” with “Just take off 10 years and 10 pounds.” If she would figure out how to do that, then I might refer to her as my beautician.

The term hairdresser evokes an image of Kim putting small articles of clothing on my hair. For some reason, that is not appealing. Can you imagine how long it would take to get ready to go anywhere if I had to choose clothing for my hair?

The term stylist seems to once again burden Kim with more than cutting and coloring my hair. Granted, she styles my hair at the end of my visit, but she has refused to come to my home and style it every morning, so what’s the point? Besides, without the rest of me being styled, it’s a moot point.

If you think about it, many of our terms and labels are sometimes inaccurate and sometimes very fluid; they summon various meanings for different people. For instance, my husband’s definition of the house being clean and my definition of the house being clean are completely different. A doctor might say an illness or injury is minor, but the patient says it is major. My daughter says that country music is the best music. I say that the best music is classical music.

Most of the time, it really doesn’t matter how a word or term is interpreted. However, there are times when it is very important.  Do you want a teacher who says that teaching is a job or a passion? What about a babysitter? Do you want someone who needs a job or someone who wants to invest in children?

And now we get to my point. One particular term exchange, though, bothers me a LOT: fetus and baby. For me, there is a HUGE difference. HUGE. When I was pregnant, I never used the word fetus. Not once. I had a baby shower, not a fetus shower. My baby was due on a certain date, not my fetus. Many years later, my daughter didn’t adopt fetuses; she adopted babies. The term fetus seems to take out the human aspect, similar to tumor or mass, which can never develop into a Shakespeare, Mozart, Edison, or Elvis.

In the first three to four weeks after conception, a heartbeat can be detected, the pumping of life-giving blood. In looking at sonograms, the nurse technicians don’t say, “And there’s the fetus’ head and little legs.” Even when it is early in the pregnancy, the different parts of a human being are distinguishable.

A baby outside the womb looks very similar to a baby inside the womb. If a woman took her 2-day old baby to the doctor and asked him to crush its skull, dismember it, and discard it, she would be arrested and examined for mental stability. If the doctor actually did those things, he would lose his license and be charged with murder. So, why is it okay to do those things to an unborn baby? It seems to me that the only difference between a baby and an aborted fetus is that a mother wants a baby and values the life of that baby whether it is expected, convenient, or affordable.

Have you watched an abortion or read how they are performed? I’m not talking about Planned Parenthood’s version that omits several details and only focuses on how what the mother experiences physically. I have heard stories, but I just now forced myself to read the process of an abortion and I’m sitting here in tears.

One process is to pull the baby (sorry, I refuse to use fetus or pregnancy or conception material) out by its legs until only the baby’s head remains inside the mother. Scissors are then used to create an opening at the base of its head, which causes the skull to collapse for easier removal. Another process literally crushes the baby’s skull inside the womb, then suctions out the baby, severing any parts that make it difficult to remove intact. Those parts are scraped out individually.

This sounds like a horror movie! Have we lost the ability to put ourselves in someone else’s place, namely the baby?

According to the CDC, there were 619,591 “procedures” that ended a life, a beating heart. Only 10% of that number reflects babies who were adopted. I cannot be convinced that all or even a large percentage the 619,591 abortions were due to medical reasons. Too many times, abortion is a choice based on convenience, money, embarrassment.

Abortions are offered at little to no cost, while adoptions cost thousands of dollars. Where is America’s priority? Pro-choice only refers to the mother having a choice, not the unborn baby. What would our world be like without Helen Keller, Albert Einstein, Mother Teresa, or YOU?

When I think of the people I have encountered and their impact on me, I sometimes wonder how many others could have participated in my life journey had they not ended up as a discarded unborn baby.

One of my favorite poets is John Donne, a minister during the late 1500’s early 1600’s. In my Honors English class, we studied a couple of his poems. “Holy Sonnet X” was one of my favorites.

(Side Note: When I would distribute copies I would say, “Holy Sonnet, Batman!” Very few laughs, but an abundance of eye rolls ensued.)

Anyway, “Holy Sonnet X” begins “No man is an island . . . and ends with “And therefore, ask not for whom the bell tolls; it tolls for thee.” (Menacing music is appropriate here since bells were rung or tolled when someone died.)

In the middle of the poem, Donne writes “Each man’s death diminishes me.” He goes on to compare the loss of life to a piece of a continent breaking off; the entire continent is changed because one piece of it is no longer connected. That’s how we feel when we lose a loved one. That’s how I feel when I think of all the abortions happening today in the United States of America.

I rewrote Donne’s poem once with a more positive twist. I changed the death-diminishing line to this: Each man’s life AUGMENTS mine. I am who I am because of my interactions, good and bad, with others; the types of lives others have led have impacted me in some way. Your life has added to my life in one way or other.

Let’s cherish the sanctity of human life so that our lives will be rich, and our social landscape will be lush.

I understand this is a controversial topic; that is not why I wrote about it. I listen to others who fight for abortion rights, and some are my very dear friends. Today seemed like a good day for me to fight for the unborn. I care enough about my pro-choice friends and myself to state what is on my heart.

PrevPreviousWhat I Learned From a Mouse
NextBeauticians to Babies Anonymous ResponseNext