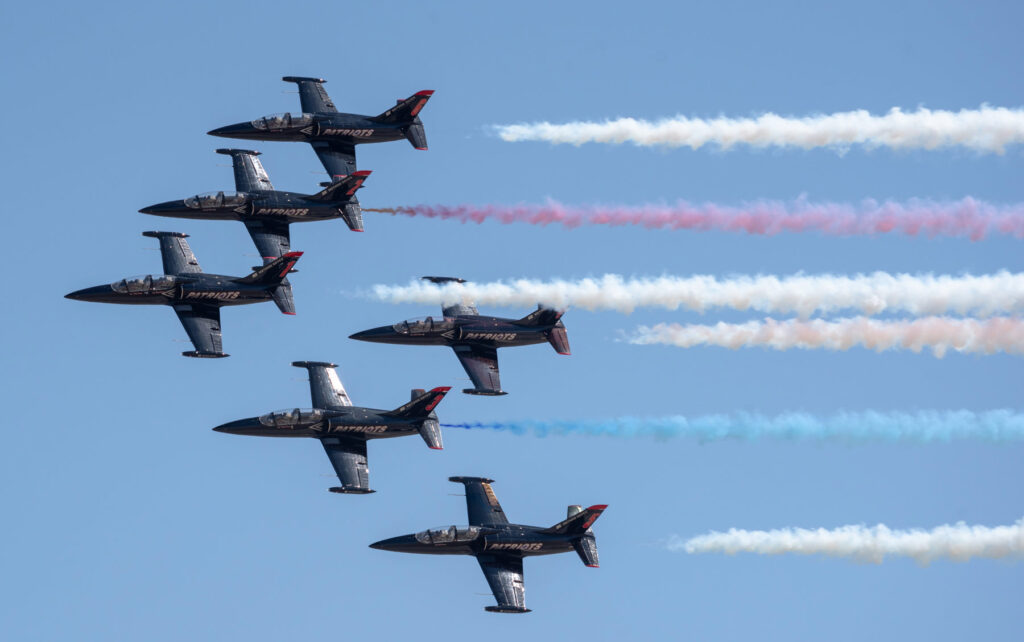 Yesterday, I took two drives through the country with my mother-in-law to our hair stylist. Only one trip was planned, but it seems we somehow showed up to our hair appointments four hours early the first time. I’m sad to report that I was the one who put the wrong time in the shared calendar.

On our second trip back home with our hair looking good, we were honored with a small air show because some jets were practicing for the air show this weekend. We watched in amazement as the powerful machines glided through the sky in perfect formation.

I have never flown a plane or a jet, and I have no desire to do so, but I have watched my husband operate a small plane. It was extremely frustrating because I had no idea if he knew what he was doing, so I had no advice to give. I just had to sit there and trust. Just between you and me, I much prefer the passenger side of a car where I can give expert advice at a steady pace.

For just a few seconds, I wondered what it felt like and what it took to fly a jet in such proximity to other jets, so I decided to do some research. According to Britannica and a few other sites, I learned that the jets can snuggle up to each other with only three feet between them. THREE FEET! I can’t even drive with only three feet between me and another car without having a panic attack.

Obviously, the formations are effective in warfare for a few reasons. The jets flying beside and behind the lead jet were there for support and protection. Most people are familiar with a wingman being an assistant in getting a date, but I am going a different direction. I am more interested in how the pilots accomplish this dangerous feat with real jets, not a lonely guy wanting help getting a date.

You probably already know this, but here are four things I learned:

First of all, there is a leader jet. Isn’t it amazing that successful ventures have a competent leader?

Secondly, there is a plan. Once again, I am satisfied that flying-by-the-seat-of-the-pants is not a good idea in any situation. The result of that strategy, or lack thereof, can often be categorized as a catastrophe.

Thirdly, all the pilots must follow the plan exactly. Sadly, I never accomplished getting all my pilots to follow the plan in my classroom. There seemed to always be one or two with their own flight plan and I had to execute a reconnaissance mission.

Lastly, all the pilots keep their eye on the lead jet, watching for a signal and listening for a command. Generally, only the lead pilot uses the radio. There is not time for a wingman to say, “But I want to go right, not left!” Whatever the lead pilot says is what the other pilots do without question or hesitation. Everyone is focused and ready to act.

Hypothetically, if I were a jet pilot in the Blue Angels, I would want to be the lead pilot. It must be so rewarding to design a plan that everyone studies and follows, to signal a turn and everyone turns synchronously. No one argues or disagrees! Everyone moves in harmony.

Realistically though, being the lead pilot would be a huge, gigantic, enormous responsibility that requires experience, intelligence, complete familiarity and confidence with the procedures and flight plan.

I’m comforted that my Lead Pilot has a successful flight plan for me. He designed the plan and has shared it with me; He simply asks that I become familiar with the plan and follow His lead. I just have to stay close and keep my eye on Him, and He will guide me through clouds, storms, and sunshine.

As a country on this Fourth of July weekend, let’s celebrate our freedoms by adjusting our formation, drawing closer to each other, and keeping our eye on the omnipotent, omniscience, and omnipresent Pilot. Can you imagine the roar as we soar through the skies of chaos, violence, anger, and dissention? We could break the sound barrier and look amazing at the same time!

PrevPreviousPerpignan vs Hairy Underarms
NextThe Art of Being RightNext