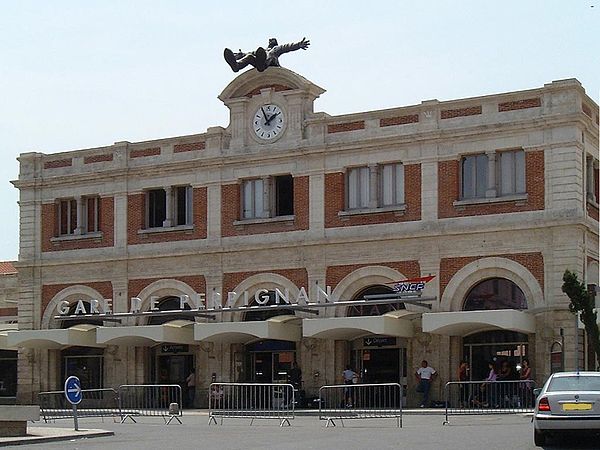 I was alone on a train in a foreign country. The clacking of the rails and rocking of the train car would have normally put me to sleep. However, I was surrounded by strangers who mostly spoke Spanish, not French. I have no problem telling you that this small town farm girl felt very alone on that train. After about an hour and a half, the train pulled into La Gare de Perpignan, and I stepped into one of the most famous stations in the world.

At that time in my life, I was teaching French in southwest Kansas and led student European tours every other year. My good friend, Colette, who taught English assisted me in organizing the tour each year. (Did you note that Colette is a French name, but she taught English while I have an American name and taught French? This has nothing whatsoever to do with this topic, but I thought it interesting.)  We usually designed our own tour but worked with a tour company to implement our itinerary. Exploring the monuments and cities that were part of our curricula with a group of our students was such a rewarding aspect of teaching.

May I insert that it is amazing how different high school students behave once they are on the other side of the ocean? Colette and I soon learned to anticipate the unexpected. One year we encountered a new, very unexpected situation. One of the students, Ethan, left his passport on a train in France. Not only did he leave his passport, but he also left his wallet that contained all his money. He kind of needed both. By the time he realized what had happened and notified us, the train had already departed the station.

Fortunately, our tour guide was able to contact the train engineer who was headed to Spain. After about an hour of anxious waiting, we were told that our student’s wallet would be at the ticket desk in the Perpignan train station. Perpignan is in southwestern France, close to the Pyrenees bordering Spain. Someone had to travel to Perpignan to retrieve Ethan’s wallet. After a bit of discussion, we decided that Colette would stay with our student group, and I would board a train to Perpignan. The tour company arranged for someone to meet and assist me in Perpignan.

As promised, a tall, pretty, slender young woman approached me and introduced herself. We went to the desk, and she conversed in Spanish with the stolid man behind the counter who opened a drawer and presented Ethan’s wallet to us. I looked at the passport picture and identified it as the one I needed. The man then opened the wallet and removed three of the bills, putting them into his own pocket. The woman explained that he took some money for his trouble. I was surprised that putting a wallet into a desk drawer was worth so much money!

With Ethan’s wallet and passport secure inside my bag, we now had about an hour to wait until the northbound train would take me back to my people. This train station was a tourist attraction because the famous artist, Salvador Dalí, had spent a lot of time there and had named it the center of the universe. Céline began giving me a private tour, which was fascinating in more ways than just Dalí’s influence.

The artwork on the ceiling was my first lesson, followed by the lobby where Dalí spent hours finding inspiration for his work. We then moved outside where she pointed out the various facets of the structure. During this once-in-a-lifetime experience, however, I struggled to even glance at the points of interest or listen intently to her riveting information on this famous train station. Why? Are you ready for this? I could not take my eyes off Céline’s underarms. As she raised her arm to point at various attractions, it was obvious that a razor had not been implemented in that area for a very long time.

Céline had chosen to be au natural. For some odd reason, her unshaven armpits trumped Salvador Dalí’s artistic influence on the famous Gare de Perpignan for me. I was more fascinated by hair than a I was by a famous artist.

I often reflect on that experience and feel embarrassed that I became fixated on such a trivial aspect of my experience in Perpignan. In fact, when I am reminded of that train trip, my memories come in this order: the train official helping himself to Ethan’s money, Céline’s underarm hair, and then Salvador Dalí’s life print on the station. Do you see a problem with that? I do.

I allowed a minor point to take priority over a major aspect of my experience. Unfortunately, that still happens with me, and I see it happen with others as well. This scenario happens to me during nearly every pain flare. I focus on being debilitated for the time and begin feeling as if I will never be able to be normal, productive, fun, or smart. Then the pain flare fades, and I find myself doing things I enjoy and the hours of being rolled up in a ball with heat on my face fade in my memory.

The pain held my attention captive just like Céline’s underarms when I was in Perpignan, and the significance of my life and relationships take second place to God’s omnipotence and unconditional love.

What are the hairy armpits in your life that draw your attention away from life and the people around you? Staring at the hairy underarm is easy; refocusing on the beauty of life and relationships . . . on Jesus can be difficult. However, there is healing, love, and power in the greater things in life.