What I Learned From a Mouse 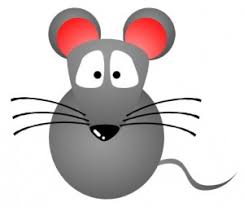 I was in our rather small bathroom with our three children, approximately one, three, and five years of age. We were getting ready for church and the clock was ticking. Ponytails, curls, and taming some pretty wild cowlicks were demanding my attention.

My husband was comfortably sipping coffee somewhere else in the house, going over his sermon notes, or maybe writing his sermon?  Suddenly, a movement caught his eye. A mouse was making a run for it, trying to figure out which way to go. When Rusty jumped to his feet, the rodent made a U-turn and ran around the corner, heading down the hallway towards the bathroom. Snoopy, our beloved Cocker Spaniel, also took note of the interloper and the chase ensued: a mouse followed by a dog followed by a preacher.

Of all the rooms in that house the mouse could have chosen for its escape, it chose the bathroom crammed with a woman and three children. Its entrance went basically unnoticed until the dog burst upon the scene, barking. When I looked down at the dog, which was running circles around my feet, I realized what was happening. Screams began escaping from my soul which evoked a similar reaction in the three children. Our scream choir was quite impressive along with Snoopy’s high-pitched yelping.

I snatched up two of the children, who were probably safer sitting on the sink counter than in the arms of a hysterical mom trying to escape a bathroom of chaos. When the mouse tired of outrunning the dog around my feet, it ran behind the toilet. This seemed like a good time to make my getaway. With a child still in each arm, I headed for the door, glancing back at the child standing on the toilet seat. She would survive. About the time I made it to the doorway, my preacher husband arrived. We did a brief, unromantic dance before he raised his leg and stomped. It was a horrible, perfectly timed move. The chase had ended, but our scampering intruder was now squished onto the bottom of his shoe and splattered onto various locations in the bathroom.

Instantly, the screaming transformed into gagging noises as we all processed the scene. With the doorway open, I made a quick departure. After arriving safely in the kitchen, I set down the two children, then I remembered the toilet-seat child and bravely returned to retrieve her. As I re-entered the scene, my husband offered the brilliant advice, “Watch where you step! Don’t look down!” Not sure how I was supposed to do both.

In thinking back on that event, I often wonder why I felt and still feel such terror over a scampering mouse. My life wasn’t in danger; his was! No one has ever died from a mouse attack, at least that I know of. A few years later, I even had a mouse run up my leg. While it was a horrible feeling – I get the heebie jeebies just thinking about it – I survived. I screamed like it had bitten off my leg, but it didn’t even hurt; it just felt creepy.

When I was little, I witnessed my mother’s reaction to a mouse. She was scooping out the leftover corn from a grain bin when a mouse scurried towards her. Have you ever seen a woman jump onto a scoop shovel and balance there? I didn’t think so, but my mother kept trying to do just that, while screaming.

I also witnessed my dad in the same circumstance, except the mouse ran up his leg. My father calmly set the shovel against the wall of the bin, unbuckled his belt, loosened his pants, and the mouse crawled out the top and ran away.

My parents’ different reactions to a mouse, I think, are based on two different things: truth and feeling. My dad could tolerate the feeling because he knew the truth about the mouse’s ability to harm him. My mother could only focus on the feeling. I’m more like my mom.

When I am in the middle of a crisis, I have to work to focus on the truth, not my feelings.  It is easier to steep myself in emotion and react accordingly than to focus on truth, no matter how trivial or devastating the circumstance.

If you think I write these blog entries for you, I’m sorry. I write them for me. I needed to hear this lesson today, but I hope it helps someone else as well.