Sometimes You Just Have to Fling a Pig 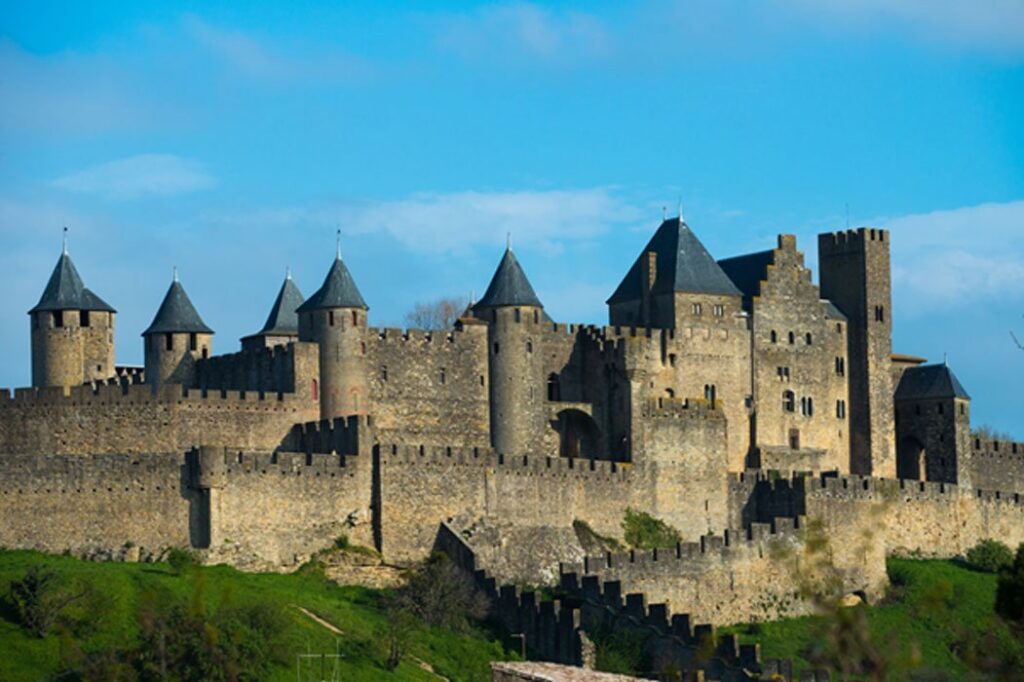 One of my favorite yet most-likely untrue stories from touring France is that of the city of Carcassonne. While this walled city is fascinating in and of itself, the legend behind all the pig memorabilia is worth pondering.

Lady Carcas paced in her room, hands clasping each other behind her back. She had seen her husband do this numerous times when faced with an important decision as the highest official in the city. Since his death, she was now in charge. As soon as the Franks, their enemy, heard of her husband’s demise, they sent an army to overtake the city. So far, the fortressed city had avoided an invasion, but was under siege. The enemy was camped all around the protective walls and had been there for nearly five and a half years.

At first, Lady Carcas feared because her city was short on strong, young men to fight or stationed in the watchtowers that the Franks kept an eye on, waiting for an opportunity to scale the wall unnoticed. So, she had several fake guards made and placed them in the towers and along the turrets. Her hope was that the Franks would get the impression that the city was well fortified structurally as well as militarily and shouldn’t even try to take her city.

However, the enemy didn’t quite get that message, so they maintained their circle around the city walls and waited and waited. Going into the sixth year of the siege, the city was now running out of supplies, so Lady Carcas asked for an exact inventory. It was reported that only one pile of wheat and a scrawny pig were left. Being the brilliant woman that she was, she ordered that all the wheat be fed to the hungry little pig until his belly was bulging. Then, (this next part may be too graphic for animal lovers, especially lovers of pigs) she had the pig flung over the wall, right into the enemy soldiers’ camp!

The soldiers gathered around the poor little pig, splatted all over the ground and decided that the city was a lost cause. If after all this time the citizens had enough food to feed a little pig until his belly bulged, evidently there were enough supplies to keep everyone strong and ready for battle; after all, there were several guards in their watchtowers every single day even after five and a half years!

The enemy finally packed up and moved on.

Sometimes I feel that the enemy has surrounded me just waiting for me to give up and give in to anger, hopelessness, doubt, or fear. I try every strategy to stay positive, fortify my walls, and outwit whatever is pressing in on me. But sometimes, my fake soldiers are discovered and inside the walls, I know things are not hopeful. But, just like Lady Carcas, some ingenuity and creativity with the resources I have – prayer, friends, and family – can make the difference. I gather what seems to be the very last of myself, my faith, my hope, my prayers, and my perseverance, whatever I can find, and we stuff my collection inside my symbolic little pig and fling it over the wall at the enemy. I can’t fling that pig by myself; I must ask for help, which for me is the most difficult part of overcoming the enemy. I’m so thankful that I have a group of fellow pig-slingers willing to help me.

Do you need help flinging your pig over the wall? Don’t hesitate to ask. If no one will help you, let me know. I have some experience with pig-flinging in the face of the enemy.